Skip to content
I have experienced utopia, living in Singapore for three months. We were living in a service apartment on the 61st floor at The Sail @ Marina Bay. The first few days I was overwhelmed with the feeling of how high up in the sky we were. What would I do in case of a fire or god forbid some other disaster . In fact, the day they were doing some work on the fire alarms, I stood in the hallway with my passports and my baby contemplating on the possibility of running down 61 flights of stairs. 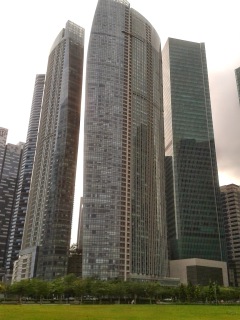 After adjusting to the pressure difference a ride up on the elevator caused, I settled down and started enjoying the view from my cozy apartment. Of the ships docking at the Singapore port and the fast paced bubbled existence that was Singapore. Every four hours or so a new ship would dock and unload its containers on the waiting trucks. At night the ships would light up and you could see the whole armada of merchant ships waiting their turn on the Strait of Singapore. 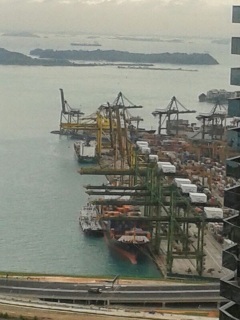 Every morning people would emerge from the hole in the ground that was the subway and head for their work places always crossing the road in a perfect line much like the industrious ants heading towards their sweet destination. Cable cars would ply to and fro from Singapore’s destination of fun, Sentosa island like tiny bubbles on a string. The Merlion would stand guard at the Marina Bay spewing his never ending stream of water. And further  away you could see the beautiful vertical gardens of Gardens by the Bay.

From my perch on top watching the thunder clouds rolling in from the sea was a sight to behold. The clouds would circle around my apartment which was all windows and then lightening would strike. After the rain had spent its fury, the sky would clear up, the clouds would part and a ray of sun would descend on the earth. 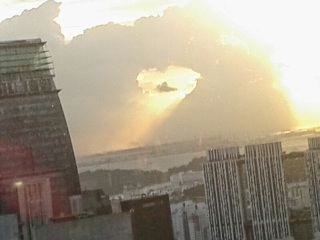 In the evenings when it was not raining baby and I would go for a stroll along the bay and the days it rained go underground and become part of office going Singapore at the link mall who were going to the metro station and doing their shopping en route. Singapore has everything you would ever need and the most kid friendly place I have been to. 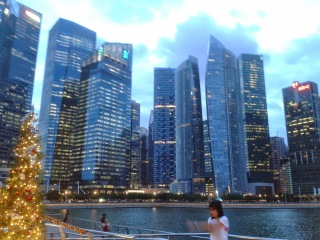 The food in Singapore is the culmination of three great food loving civilizations Malay, Chinese and Tamil. The best noodles, satay, laksa, dumplings and idlis can be found here. I hardly cooked while in Singapore as there were new and amazing dishes just waiting to be tried. I used to stand loyally in line everyday at the nearby Tuck shop for my daily dose of chicken rice. My small window of life in Singapore has made me fall in love with the city where chewing gum is forbidden .
(Photos are taken on a phone from long distance, please forgive the quality) 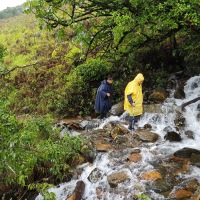 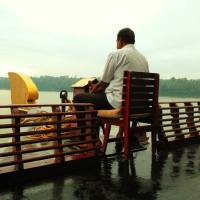 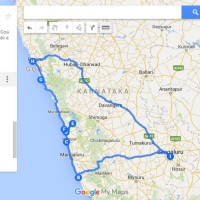 There are times when you feel you are on a junk! And you will be right if you are in Halong Bay. Sorry low hanging fruit. The experience on the junk in #vietnam was probably one of the more expensive things we did on our budget trip to #vietnam. We used Splitwise to ensure we were on track budgetwise and also to manage expenses and split it between us. I also traveled with a @go_niyo card instead of swipping my debit card (I don't own a credit card) at random ATMs. I used the Niyo card which had predetermined amounts in the card and no foreign exchange surcharges. My friend did experience credit card fraud while in Vietnam so this travel card did come in handy. #backpacking #boats #vietnam #budgettrip #halongbay #vietnamnow #notsponsored #girlstrip
#Repost @womensweb with @repostsaveapp ・・・ The Orange Flower Women’s Festival 2019 is an annual mega event where women come together to roar for Change - and have fun doing it! ​Join us at this daylong fest in Mumbai, where you will meet change-makers, listen to heart-warming, inspiring talks, and participate in events of your choice (stay tuned for a poetry slam, film screenings, quizzes, art workshops and more!) Here's what we have planned for you: ▪ Day-long sessions with some of our society's most impactful and inspiring change-makers including Film-maker Alankrita Shrivastava (Lipstick Under My Burkha), Cricketer Snehal Pradhan, Industry maven & Author Apurva Purohit, Author Kavita Kane, Film Reviewer & Star YouTuber Sucharita Tyagi, and more! Check out the speaker list here. ▪ An opportunity to listen to India's most inspired emerging poets at a poetry slam where women raise their voices ▪ A writing workshop on writing gender and writing intersectionally ▪ A fun quiz with Yooti Bhansali ▪ Performances including music and stand-up comedy ▪ and lots more, including of course The Orange Flower Awards 2020 at the end of the day! Don't miss this opportunity to bask in the warm glow of sisterhood, come join us at The Orange Flower Festival 2020 which celebrates the power of being a woman today. Tickets are yours at just Rs.250 (of which you get to redeem Rs.200 on F&B thanks to our awesome event partners anti Social). Log on to www.orangeflowerfestival.com/register (link in bio) #orangeflowerfestival #orangeflowerawards @orangeflowerfestival And I will also be there. #mumbai
This year I wish that you are able to break the bubble of your own creation. A bubble that formed around you by design and your willingness. I hope you are able to see the other perspective and understand empathy from a different stand point and have an understanding different from hate filled agendas with narrow objectives. #HappyNewYear #travelblogger #travelling Pic credit @sreesha_diva
The #varanasifoodscape captured in one post. In order of appearance Go swipe for your stomach. Tamatar chat Papdi chat Kulfi Kachori sabji Lassi from @babalassi Laung Lata Tulsi chai Burp.... #Varanasi @varanasi_ghats @varanasi_food_shaukeens