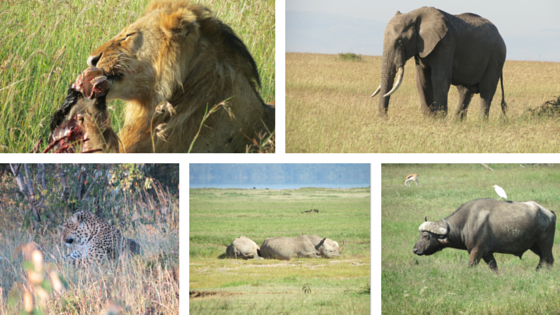 I still can’t believe that these pics were taken by us in our own camera. The experience of traveling in an open jeep in the fabled Savannah grasslands of Kenya was surreal and if I die and have a stupid smile on my face, I am probably thinking of this trip. We planned our safari to the Masai Mara with Cosmic Safaris a tour group in Kenya and they helped make our 4 day trip to Kenya worth every penny.

The safari included Lake Naivasha which I will always remember as the eerie lake which is said to be a paradise for herbivore and Lake Nakuru the salt water lake which is home to flocks of pink flamingos and the white Rhino and the open grasslands of Masai Mara which is legendary for the Great Migration and the big cats call home. Seeing the Big Five is the holy grail for any safari and once we were able to see the leopard the most elusive of the five our safari guide Joseph was all grins and so were we as we drove out of the Masai Mara.

My two year old still talks about the safari in his limited vocabulary of, ‘ jacket, trucku (referring to the jeep we traveled in) and LION! We saw the first of the Big Five- the Rhino at Lake Nakuru which is 5 hours away from Nairobi. The Rhino is very difficult to spot as the black Rhino feeds at night and hides during the day so on a day safari you would count yourself lucky if you spot the rare White Rhino. Hiding is quite a feat for these animals in the open Savannah but they pull it off quite efficiently. We even chanced upon a lioness who had strategically climbed up a tree and the only thing one could see was one of her huge paw.

The next big cat we spotted on our first drive in Masai Mara, this was the cheetah- though technically the cheetah is not part of Big Five which quite baffles me. This cat sat oblivious to the safari jeeps nearby that it continued licking its paws while brilliantly hidden in the tall grass. I am sure the cheetah is not worried as much because if it really needs to take off it can do so at 80 km/hr in less than a minute. We saw the African elephant next, this huge untamed creature is a sight to behold and is quite easy to spot in the Masai Mara.

The buffalo is also part of the Big Five and is another untamed African animal, I draw this analogy because in Asia elephants and buffaloes have been domesticated for centuries but their African counterparts have staunchly refused any such attempts by man instead it is the donkey that is bearing the burden in Africa.

The most magnificent of the Big Five was a pair of male lions that were enjoying a healthy breakfast of a wilde beast with hyenas, jackals and vultures waiting at the table for their turn. One jackal looked mighty pleased with herself as she found an unappetizing organ that the lions had discarded. Chancing at this smorgasbord in the midst of the Masai Mara and being 30 meters away from them was definitely a high point.

Seeing the diversity and the ease with which the animals roam in this slice of land that they call their own is humbling since humans walked these same grasslands as primitive man not very long ago. There are still some tribes like the Masai that live in harmony with the animals on the periphery of the Masai Mara. I will write about our time at the Masai village next, stay tuned.

Pictures credited to Razor Rasu as I was holding the baby. 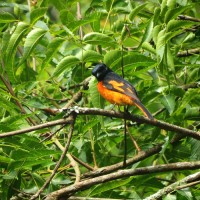 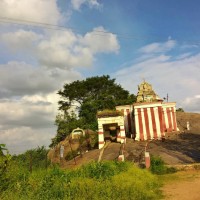